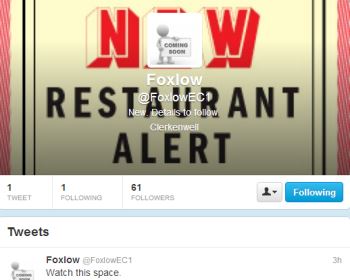 Updated 25/9/13 with soft launch info, opening date and more about the food

Some exciting news - an email hit our in-box this morning to say that Will Beckett and Huw Gott from Hawksmoor have signed a lease on a space on St John Street in Clerkenwell - which formerly housed North Road restaurant - and hope to open a new 100-cover restaurant and bar, Foxlow, in November.

According to Will; "For a while we’ve wanted to do a smaller, more intimate restaurant, the kind of thing we wish we had near our homes and where we could go regularly with friends and family. It’s a new restaurant, so we can finally use some of the many ideas we’ve had in the last few years, but it’ll still reflect the things we’re most passionate about - great meat from ethically reared animals, an interesting wine list, phenomenal cocktails and relaxed, friendly service from people who love what they do.”

It may not come as a huge surprise to learn that the menu will have a fair bit of meat on it. But what you'll get here are some of the lesser known cuts such as Deckle, the top, fatty part of the ribeye, butchered by Tim Wilson of The Ginger Pig or pluma, supplied by Brindisa. Executive chef Richard Turner has also been hard at work on the menu coming up with treats such as Six-hour Bacon Ribs and Eight-hour Beef Shortrib. There'll also be fish and seafood from Brixham market.

Probably the biggest departure from the Hawksmoor menus is the range of salads on offer. But if you do decide to go for the lighter option you can always undo all that good work with some of the soft serve sundaes created by Hawksmoor’s pastry chef Carla Henriques .

As for drinks, Foxlow’s cocktail list will have 12 new and original drinks including a Smoked Bloody Mary.