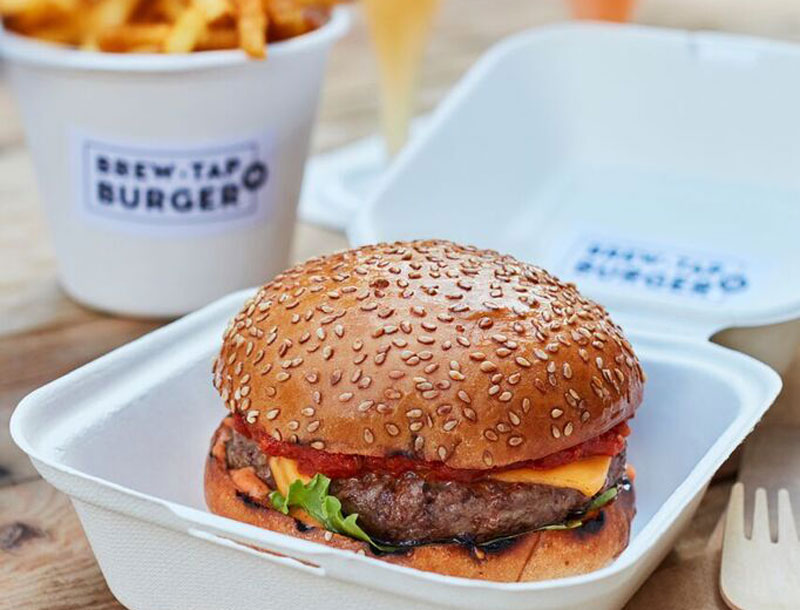 With its compact menu and just a handful of simple, Aperitivo-style drinks on offer, Brew Tap Burger is a prime example of why it’s always better to do a few things, but do them well.

Lovers of all things fizzy will be in for a treat, with Prosecco Frizzante available on tap - as all the best things in life are - plus monthly rotating Bellini specials. For the beer drinkers, try an imported Birra del Borgo Cortigana, an amber ale from the heart of Italy. Britain will also be represented at the bar by South East London’s Hiver Honey, made with honey from urban beehives. Or go slightly further afield with a bottle of award-winning Scottish pilsner, Harvistoun Schiehallion. There’ll also be monthly beer tasting events.

So we’ve heard about the brew, and the tap - what about the burger? Well, it’s definitely quality over quantity. All the burgers are made with 35-day dry aged beef from Scotland, and come with the option to add rare breed streaky bacon. There’ll be the Sweet Miso, which comes with fennel-infused red onion jam, the Chilli Smoke, which is loaded with spicy tomato chutney, plus a classic cheeseburger served with healthy dollop of paprika mayo.

“For Brew Tap Burger we’re using simple quality ingredients combined with of some of my favourite classic and more experimental flavours. We’ve sourced great craft beers that work really well with our food and, although we’re not in Rome, for aperitivo it had to be Prosecco and bellinis,” Rohit said.